October 13, 2006, the defendant driver was driving a dump truck weighing 68,000 pounds. The truck was traveling east exiting the rotary, in Concord, Massachusetts. After the Route 2 light turned red and the traffic slowed, he swerved from the right lane to the middle lane at a high rate of speed and ran through the red light. 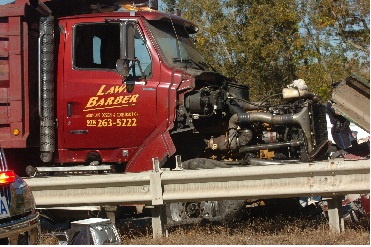 Notwithstanding the clear evidence of negligence, the district attorney’s office prosecuting the driver in criminal court, and the Commonwealth of Massachusetts finding the company that leased the vehicle guilty of several violations, Commerce Insurance Company refused to make any offer of settlement. Caring greatly for our client, we attended each and every criminal hearing of the defendant, even though the district attorney had competent counsel.

Using aggressive “discovery,” we determined that the defendant driver had an extensive driving history for speeding, marked lanes, and red light violations. In this case, he was convicted of speeding, marked lanes, red light violation and wrongful death and was sentenced to 18 months in the Middlesex House of Corrections. The plaintiff was prepared to prove that the owner of the truck and the employer of the driver were negligent in hiring and retaining the defendant: they “knew” his driving his driving history, yet allowed him to drive their trucks.

On February 9, 2003, Mrs. J. was found dead at the home of the defendant as a result of the negligence of the defendant. Her family retained the  Burns & Jain. We probated her estate and filed suit for wrongful death against the defendants, who were medical professionals in a social setting, yet failed to come to the aid of Mrs. J., failed to call an ambulance for Mrs. J., and allowed her to die without medical attention when they knew she was ill.