Isn’t it a parent’s worst nightmare? You send your kids off to school and you expect them to be protected. This starts with the school bus.

In a case where we represented the family of a 14 year old girl in a town near Medford, Massachusetts, the parents’ nightmare occurred. Betsy’s uncle was visiting from overseas and walked her to the bus stop the Monday after Thanksgiving in 2010. It was cold. It fact, it was so cold that there was the first frost of the season that morning.

How Can a Child Get Hurt Crossing the Street to a Stopped School Bus? 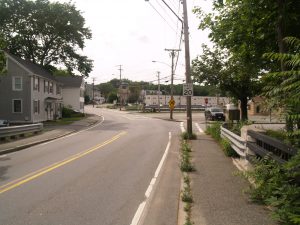 Location of the Bus Accident

Uncle George walked Betsy to the bus stop. Other children were there, playing, talking and cavorting about. The bus stop is next to a train crossing so any vehicles coming on the street are forewarned about a train crossing. When the bus arrived it stopped and the driver activated the lights and protruding “stop” sign. The children crossed. Uncle George kissed Betsy goodbye and she began crossing.

Unfortunately, a 17 year old with a new license and no experience defrosting the windows in cold weather was driving along that road at the same time. She lived one mile away and was driving to high school in her family’s minivan. Because of her frosted windows, she did not see the bus, the stop sign, the blinking lights, or, of course, Betsy. Without even slowing down, the 17 year old struck Betsy with the minivan causing her body to be thrown into the air above the roof of the van. Betsy landed on the street and lost consciousness. The driver didn’t even stop. She was chased for several hundred feet, over the train tracks, before she stopped.

The police investigation confirmed that the windows were all “frost covered” and cited the teenage driver.

Betsy was taken to a local hospital by the EMTs where she was treated by the trauma team in the Emergency Room. A CT scan found swelling and a hemorrhage on the left side of her brain. She was diagnosed with a closed head injury and sent to Children’s Hospital in Boston.

Her parents called our office and we met at Children’s Hospital to review the family’s legal rights.

At Children’s Hospital she was treated by the Brain Injury Team for several days. Treatment consisted of medicine to reduce swelling and close observation. Fortunately, she was released home with instructions to stay out of school for a period of time. She complained of headaches, nausea, fatigue and hip soreness for a period of time. A neurologist we recommended diagnosed Betsy with mild post traumatic headaches with sleep disorder.

Once better, we aggressively pursued Betsy’s legal rights. The Massachusetts insurance company that insured the minivan took a “wait and see” approach. We didn’t. We pointed out that absent an immediate reasonable offer of settlement, we would file suit and include a count of “negligent entrustment” which would not be insured. The insurance company would be setting up their insured for a lawsuit which they were not insured for.

Betsy’s family’s damages included Betsy’s pain and suffering, Betsy’s medical bills, and Betsy’s total disability while she was in the hospitals and home from school. In addition, we claimed damages for her parents’ loss of consortium and lost earnings while they missed work and cared for her in the hospital and at home.

What Did an Aggressive Personal Injury do that was Effective?

The settlement was approved by the judge in a local court with Betsy’s father testifying only to the adequacy of the settlement and assuring the Court that the monies would be put into a college trust account for her.