On a beautiful spring day in 2016, our client, “Darcey” was taking a walk and enjoying an East Boston park when, suddenly and without warning, a German Shepard who was not on a leash knocked her over and bit her arm.  The owner, who had recently acquired the dog and did not know its violent tendencies negligently let it off the lease in violation of Massachusetts Department of Conservation and Recreation regulations.

302 Code of Massachusetts Regulations (CMR) 12.13, states: “No person may cause or permit any pet, horse, or other domesticated animal to be unattended or to roam or be at large on DCR property”

The owner needed to wrestle with the animal to get it off of Darcey.  The dog attack resulted in wounds to Darcy’s arm, back and stomach.  Perhaps more significantly, the trauma from the dog attack caused emotional distress.

Massachusetts General Laws, Chapter 140, Section 155 states “If any dog shall do any damage to either the body or property of any person, the owner or keeper…shall be liable for such damage,” unless the individual who was damaged was committing “a trespass or other tort, or was teasing, tormenting, or abusing such dog.”  Of course, Darcey was not in any way trespassing or teasing the dog – she didn’t even see it until it was coming at her in the East Boston park.

Darcy was treated for her injuries at a local medical clinic, with acupuncture and with a therapist for anxiety sleep disturbance.  Her treatment lasted over six months.

The insurance company sent an outside “adjuster” to interview Darcey in our office.  We provided pictures, allowed for more photographs to be taken and Darcey answered all questions.  Interestingly, the outside adjuster reported taking a statement from the dog owner and visited the dog and noted it’s “viciousness.”  Nevertheless, the insurance company dragged its preverbal feet and made no offer to our client’s demand.  Thus, we sent a demand letter pursuant to Massachusetts General Laws, Chapter 93A, the Consumer Protection Statute.  As a response to our 93A Demand, the insurance company made a minimal offer of settlement. 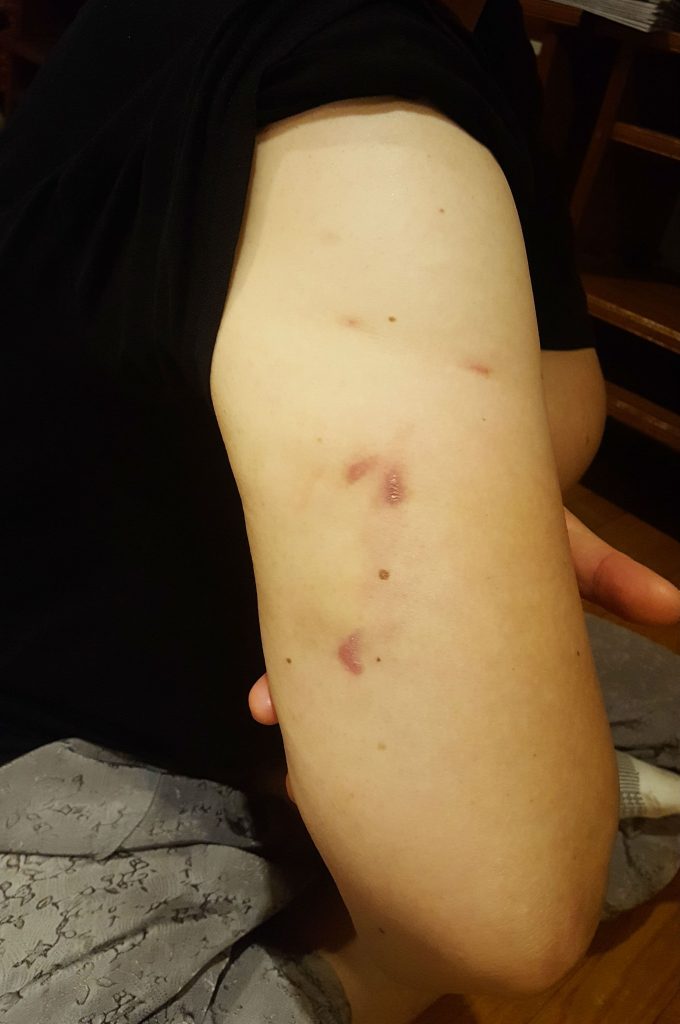 Immediately thereafter we filed a lawsuit in Suffolk Superior Court.  Once the defendants (the owner of the dog and the girlfriend/owner of the home where the dog was living) had insurance defense counsel, the insurance company was advised to resolve the matter fairly and the parties submitted to mediation.