Who is at Fault in a Rear End Accident in Massachusetts? 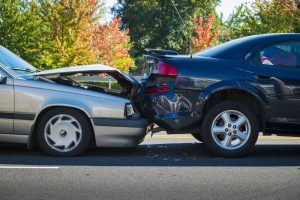 One of the most common types of car accidents is a rear-end collision.  These consist of nearly 40% of all car crashes in the U.S., if not Massachusetts.  If you were involved in a rear-end accident, how do police officers and insurance adjusters determine who was at fault?

Liability in any accident is determined by the facts of the case.  Facts are the statements of the parties involved, any eyewitness accounts, the location of the vehicles, existence of skid marks, and the property damage.  In some cases, surveillance cameras from a vehicle’s dashcam or from traffic devices and even adjoining businesses may have recorded the crash.  A video record of a crash can be the only evidence to identify a hit-and-run vehicle or to corroborate or refute a driver’s account of an accident that is at odds with the other party’s version of events.

In most rear-end accidents, the only witnesses are the drivers.  If you were at a stop sign or red traffic signal and were rear-ended or were in heavily congested traffic and hit from behind, liability will nearly always be inferred on the driver who struck you.  In some cases, that driver will claim that you stopped suddenly or were even backing up at the time, but absent corroborating evidence a finder-of-fact will generally conclude that liability ultimately rests with the vehicle that initiated the crash – the driver was not paying attention or following too closely.

Negligence is the standard by which liability is found.  All drivers owe a duty to exercise ordinary care to any other vehicle or pedestrian on the roadway.  This means obeying the traffic laws, to not drive faster than traffic conditions permit, and to keep a safe distance from vehicles in front of you.  If the other driver failed to obey the traffic laws or to maintain a safe distance from a car in front of him and collide with that vehicle, then he or she has breached your duty of care and will be found at fault.

Factors that are often the cause of rear-end collisions are:

Many rear-end collisions are caused by tailgating drivers or from those who are speeding or driving too fast for traffic or weather conditions and are unable to stop in time when a vehicle in the same lane stops for congestion or for a traffic signal.  Many are caused by drivers who cannot keep themselves from checking their cellphones every minute or so rather than focusing on driving and what is front of them.  And the list of distractions is endless.

If you take photos of the vehicles at rest, the property damage, and the conditions that existed at the time, you can often clearly demonstrate that you were struck by a negligent driver.  In a serious accident where police are called to the scene, the investigating officer can question the drivers and might observe that one of the parties appears fatigued or under the influence.  The officer can also look at the party’s cell phone to see if the driver was engaged in talking or texting in the moments preceding the accident, especially if you noticed the driver was holding his phone in the moments before or just after the collision.

In any accident, it is vital that you take account of any evidence at the scene to verify your version of the accident and to establish liability on the other party. Steps you should take include:

In most rear-end accidents, liability is not an issue.  But if the other party does assert that you were backing up, photos of the scene and eyewitness accounts can undermine their arguments. But retaining an experienced car accident attorney to handle your claim will give you the best opportunity for a satisfactory resolution of your claim.

Damages in a car accident claim depend upon the nature and extent of your injuries. These include:

Your compensation is dependent on your damages. Only a seasoned car accident attorney can obtain the necessary documentation to present your damages to an insurance adjuster and get you the compensation you deserve.

Retain the Law Office of Burns and Jain

A car accident attorney from Burns and Jain has years of experience in handling rear-end accidents and other injury claims regardless of the issues involved. Call our office today at (617) 227-7423 for a free consultation about your injury claim.