What to Do After a Hit and Run in Massachusetts 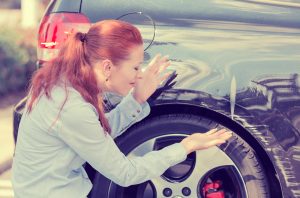 Any time you are in a car accident in Massachusetts that caused property damage and/or personal injury, you and the other involved driver are required to exchange certain information including driver’s license, registration, and insurance.  Failure to do so exposes the fleeing driver to criminal penalties.  But what happens to YOU if the other vehicle flees the scene without exchanging the required information?

A common defense in hit-and-run cases is that the driver did not realize an accident had occurred, especially if the negligent driver’s actions caused you to swerve into a tree or obstacle, or slightly nicked your car that caused you to lose control.  However, if there was a collision then it is unlikely that a reasonable person would not have realized that an accident had occurred. Also, even if the negligent driver stopped but either gave a false name or failed to give all the required information before leaving, that is considered hit-and-run.

If you were involved in a hit-and-run accident, it is imperative that you immediately notify the police to report the accident.  You will need this for insurance purposes and to allow the police to promptly investigate to identify and locate the driver.  Further, under Massachusetts law you only have 5-days to report the accident if there were injuries, a fatality, or the damages were in excess of $1,000. The required form for this is the Motor Vehicle Crash Operator Form that is to be submitted to the RMV.  If you or anyone else did not call 911 following the accident, then the form must also be sent to the appropriate police department.

Although many drivers who flee an accident scene are never identified, a fair number are tracked down, especially in serious and fatal accidents.  Any kind of identifying information can help identify the vehicle such as incomplete license plate numbers and letters or the make or model of the vehicle and color.  If the auto that fled left some parts behind, experts can often identify the make or model of the vehicle.  Police may canvass the area of the accident to search for damages vehicles or make public service announcements for residents to report recently damaged vehicles in their area. Many drivers are identified through such means.

Your insurance company may also have a reporting requirement for any accident.  Contact your insurer as soon as possible and let them know that you have reported it to the police.  Ask the police for an identifying number of the report that you can give to your insurer.

Further, if you were injured, then contact a car accident attorney from Burns and Jain. Our attorneys will handle your claim, whether it is a third-party claim if the other driver is identified and was insured, or if your claim becomes an uninsured motorist (UM) claim should the driver not be found or was uninsured.

There are several reasons for why a driver might feel that remaining at the scene of an accident would imperil them in some way and that fleeing the scene is a worthwhile risk. These include:

None of these reasons are valid, of course, and a driver who is identified and arrested will face serious consequences for having left the scene of a serious or fatal accident. It is everyone’s legal and civic responsibility to report an accident to the proper authorities.

Should the defendant driver not be located or identified, you do have recourse to receive compensation for your injuries through the uninsured motorist (UM) provision of your own auto liability policy.  UM coverage is mandatory in Massachusetts, however, only the minimal $20,000 is mandatory.

A UM claim proceeds like a routine third party claim that would be brought against the defendant’s insurer except that the adversary is your own insurer.  You also must prove that the accident was caused by the negligence of the unidentified driver, regardless of whether that person fled the scene.  Your own version of events is usually the only eyewitness account that is available, but the location of the property damage on your auto, the extent of the damage, and any other available facts in conjunction with the assumption that a driver fled because of knowledge of his own liability can convince an insurer that you were not at fault.  Regardless, your insurance company will not be on your side – you need an effective advocate!

The other difference between a UM claim and one against a third party who caused the accident is that it is ultimately resolved, if not settled, by binding arbitration instead of a court or jury trial.

Your auto accident attorney will need to obtain medical records, employment or school records, medical reports, and reports and records from other experts such as vocational or rehabilitation professionals in order to properly present your damages.

Retain the Law Office of Burns and Jain

A car accident attorney from Burns and Jain has decades of experience in handling car accident injuries including uninsured motorist claims and can advise you on liability and coverage issues. Call our office today at (617) 227-7423 for a free consultation about your injury claim.