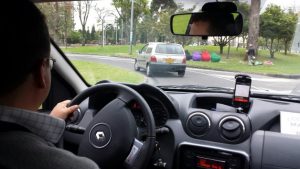 Uber has been in the ridesharing business, also referred to as the transportation network company (TNC) industry, for about 5 years and currently boasts over 1.5 million drivers worldwide with 600,000 drivers in the US, most of whom own and use their own vehicles. Since its inception, however, there have been issues with the company regarding liability for an Uber car crash, fares, insurance and how drivers are selected. To address these concerns, the Massachusetts legislature has passed a new ride sharing bill.

Uber and Lyft are the two major companies in the ride sharing industry. Drivers log in on their own apps and drive to the designated pickup once a ride has been requested to meet passengers and then deliver them to their destination. No cash or credit cards are exchanged as the rider’s credit card is part of their account and is automatically charged once the ride is completed.

Many of the issues raised by local officials over Uber and Lyft practices center around driver selection, insurance coverage in an Uber car crash and fares.  There have been reported incidents of drivers assaulting passengers or engaging in reckless driving.  Uber has fought liability for car accidents and personal assaults by drivers by usually claiming its drivers are independent contractors.  Uber has also claimed its background checks on drivers are extensive despite assertions to the contrary by others and has fought against requiring its drivers be fingerprinted.  In regards to fares, passengers have complained that they were at times not informed of what their rides would cost and were charged at surge prices without their knowledge.

The new Massachusetts ridesharing bill contains a number of provisions designed to relieve concerns about insuring ride share vehicles with adequate coverage, when certain insurance applies, for conducting sufficient background checks and informing passengers of estimated fares. The major aspects of the bill are:

Liability in an Uber Car Crash

Liability and insurance coverage issues in an Uber car crash were not unusual for many Uber accident lawyers.  Since Massachusetts law only requires that drivers have insurance of $20,000 per injured driver, $40,000 per accident and $5,000 for property damage, attorneys had to seek additional compensation for serious accidents from the ride sharing companies.. Also, some drivers were uninsured while others found that their coverage was denied because they failed to advise their insurers that their cars were being used for commercial purposes. Uber was also asserting that it was not liable either because its drivers were independent contractors or because no passenger was in the Uber vehicle when the accident occurred.

The new law is designed to eliminate the possibility that an insurer will deny coverage because a driver failed to advise it that the car was being used for ridesharing and ensures coverage for passengers.  A passenger in an Uber car or another motorist or pedestrian who is injured by an Uber driver while driving to pick up a prearranged ride or deliver a passenger may take advantage of the $1 million coverage.

Passengers who are assaulted by a ride share driver may have a difficult time suing the company directly if the 2-step background check was used to screen the driver and no convictions or sex violations were found since intentional acts are usually excluded absent some other factor implicating the TNC company.

Damages in an Uber Accident

If you were injured by an Uber driver either as a passenger, pedestrian or other motorist, contact an Uber accident law firm such as Burns & Jain of Boston. He can analyze your case for liability and coverage issues and determine which policy is applicable, ensure that you receive PIP benefits and that you are adequately covered.

Damages in an car accident may include:

Contact Boston Uber accident law firm Burns & Jain if you or a loved one was injured in an Uber car crash.  Burns & Jain can ensure you will receive the representation you need to receive the compensation your injury deserves.  Call us today: (617) 227-7423

Burns & Jain is open and currently taking new cases! Due to the nature of the Corona Virus we’re conducting all client meetings over the phone or video and working entirely remotely. To schedule your initial consultation please call us today at: 617-229-6950